At the end of October, Kate Wallace will be stepping down from her role as Programs Director. Kate has put in many hours to the Hub and is a big part of the reason we are still here. We are grateful for her dedication and are glad she’s not going away completely!

The land teaches us that all disturbance creates opportunity and a flourish of new growth. We are excited to introduce the two people stepping into this role – Nick D’Amore and Eileen Murphy.

Eileen has a background in tool engineering, organic farming and permaculture landscaping, and will be taking the lead on programming for the Hub. After graduating from UMaine Orono with a degree in Engineering and a minor in Sustainable Agriculture, she went to work for the summer as Eliot Coleman’s intern working on Four Season Farm with the Slow Tool Project in collaboration with the Stone Barns at Blue Hill and Johnny’s Selected Seeds. During that period she designed hand tools for the small-scale farmer, some of which are the preliminary prototype for tools sold at Johnny’s today! She is most excited about continuing the Hub’s collaboration with the Maine Tool Library and getting involved in Permablitzes to meet more of the community.

Nick has kept his feet planted in a variety of fields over the last 7 years, balancing his interests and commitments to food justice, grassroots activism, experiential education, and hospitality. He believes in our ability to build networks of equitable support through collaboration, creative problem solving, and radical dependence. Nick’s values resonate strongly with the social aspects of permaculture, and he’s dedicated to learning the agricultural principles that support them.

Please feel free to reach out to these two and introduce yourself!

The growing season is upon us and the Hub’s Garden Mentorship Program is back for 2021!

If you would like to participate, we’re asking that you fill out THIS SURVEY by Friday March 12 so that we can match you with someone who shares your goals and interests. We are hoping to have mentors and mentees paired up by the first day of spring!

The Resilience Hub is committed to building a more localized food system and mutual aid networks in our community. One of the ways we can be of service during this time is to support the building of food growing spaces for people who have been impacted by the pandemic and are seeking greater food security.

To this end, we have decided to sponsor and organize in-person permablitzes / work parties again. We’ve come up with a list of guidelines for these events to lower the risk of transmission. Mt. Joy Orchard has already begun hosting work parties with good success.

Here is the evolving list of guidelines we’ve mapped out (with special thanks to the Mt. Joy Organizing Team for working out most of these):

If you are interested in participating and have any questions or concerns, please don’t hesitate to email info@resiliencehub.org.

Okay, I said I wouldn’t write again about the hugelkultur until I had plants to show, but I can’t resist giving another update.  Yesterday, I finished planting the mound!  I learned some things in the process.  It is very hard to water the whole mound–the water stays on the surface and slides down the sides.  So I made small indented areas along the top of the mound in which to plant seeds so they could hold water: a round bowl-like indentation for a zucchini “hill,” and a square indentation for some bush beans.  I put the first zucchini “bowl” near one end, so that the plant could drape over the edge. I alternated zucchini, then beans, then zucchini, then beans. I found some brown packing paper to use to help block weeds between the plantings, and put some straw in my seed areas for mulch. I used little twigs and stones to hold down the paper.

I planted three kale seedlings in the next area, then a “bowl” for cucumber seeds at the other end.  I really could only plant in the very top across the mound, because nothing else was stable enough to water and keep the soil.  I did tuck a couple of borage seeds lower into the side, in case they might grow there, since they are good companion plants for all of these. I tried to pick spots that had some support, and under where the beans would be. But it is very hard to water the sides without the soil sliding down. I imagine that if someone made a hugelkultur mound in the autumn, it might settle enough over the winter to be more usable on all of its surface area.  But that idea of planting up both sides didn’t really seem feasible to me, though it was part of what appealed to me in the first place. Right now, planting the squash and cukes which like to spread out with a lot of vines seems the best idea.

Meanwhile, I planted other kale seedlings tucked into spots around the peach and cherry trees circles in our orchard, along with some lettuce and carrots.  I love the polyculture feel of the food forest.  I now have a total of 13 kale plants thanks to friends Mihku and Sylvia.  I think of them as my tried and true veggie for the year–easy to grow, pick and eat, and freeze for the winter. So far, they have grown really well in our food forest.

Meanwhile, we also have sea kale, a lovely perennial kale that we have already been harvesting in early spring, along with our chives and oregano and thyme. The asparagus has been disappointedly spindly this spring so far. I had been hoping I might get a bunch to eat since this is its third year, but I only had a few spears worthy of snacking on. I guess they need more compost to keep them well fed.  However, I am excited about these new zucchini, bush bean and cucumber plantings.  Wish me luck!

This post was first published in my blog, Finding Our Way Home: A Spiritual Journey into Earth Community.  I have learned so much from my involvement with the Resilience Hub, and am so grateful for our community of mutual support.

Wow, it has been a month since Hugelkultur 4 when I last devoted a full post to progress on our hugelkultur garden bed. I am happy to say that yesterday I planted the first seeds! It has been a slow process of adding more soil and compost, a little bit each day, plus another layer of seaweed to help keep some of it in place. I also added soil and compost to the area between the mound and the logs marking the path, so there is a lower level on that side as well as a higher level. That in turn provided support for something like a slope of soil on that side. We planted lettuce and broccoli and spinach in that lower area, which will get a little more shade than other parts of the mound. It is a bit late in the season for all of those, so we’ll have to see how they do. 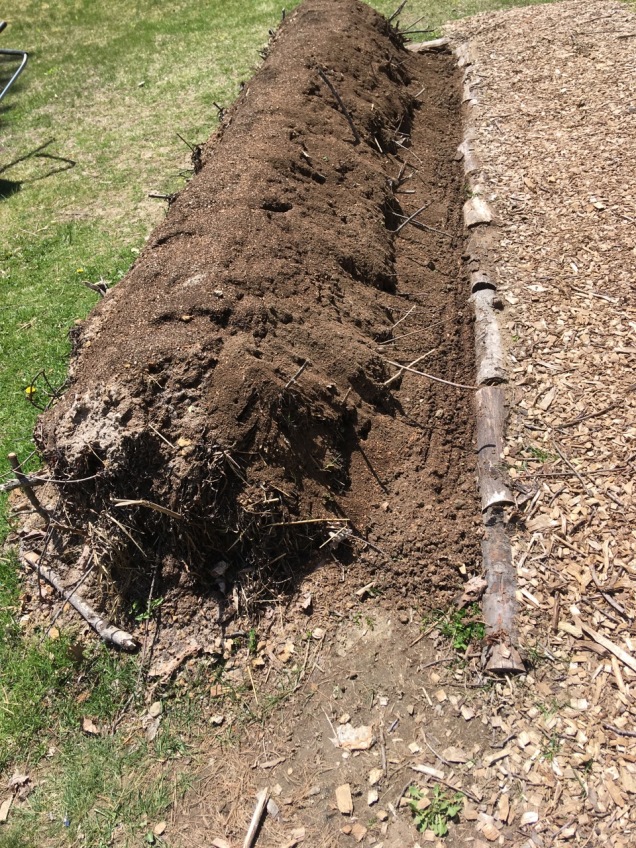 I finally decided that it wasn’t really possible to get enough soil to stick to the other side to use that as a planting surface, at least for this year. I’m calling it done for now! But as the mound ages and settles year to year, I think it will continue to evolve and we can keep shaping it and adding to it. For now, I intend to plant zucchini and bush beans and maybe some cucumber and kale on the top of the mound, and the zucchini and cukes can cascade down the sides. Our last average frost date in Portland is May 24, so those will get planted soon. [This will be my last hugelkultur update until I can show you the plants growing all over the mound!]

Meanwhile, speaking of frost, we had three freeze-warning nights this past week, and we covered our blooming peach tree with a tarp each night. But yesterday, I witnessed the best thing ever. I was sitting in my chair and saw a flash of something out the window, so I looked up. There was a tiny hummingbird, the first of the season, visiting each of the peach blossoms looking for nectar. I can’t explain why it moved me so.  All of the care given to the tree, all of the natural beauty of the tiny hummer. No way to capture it in a photo, but here is the peach tree in bloom. 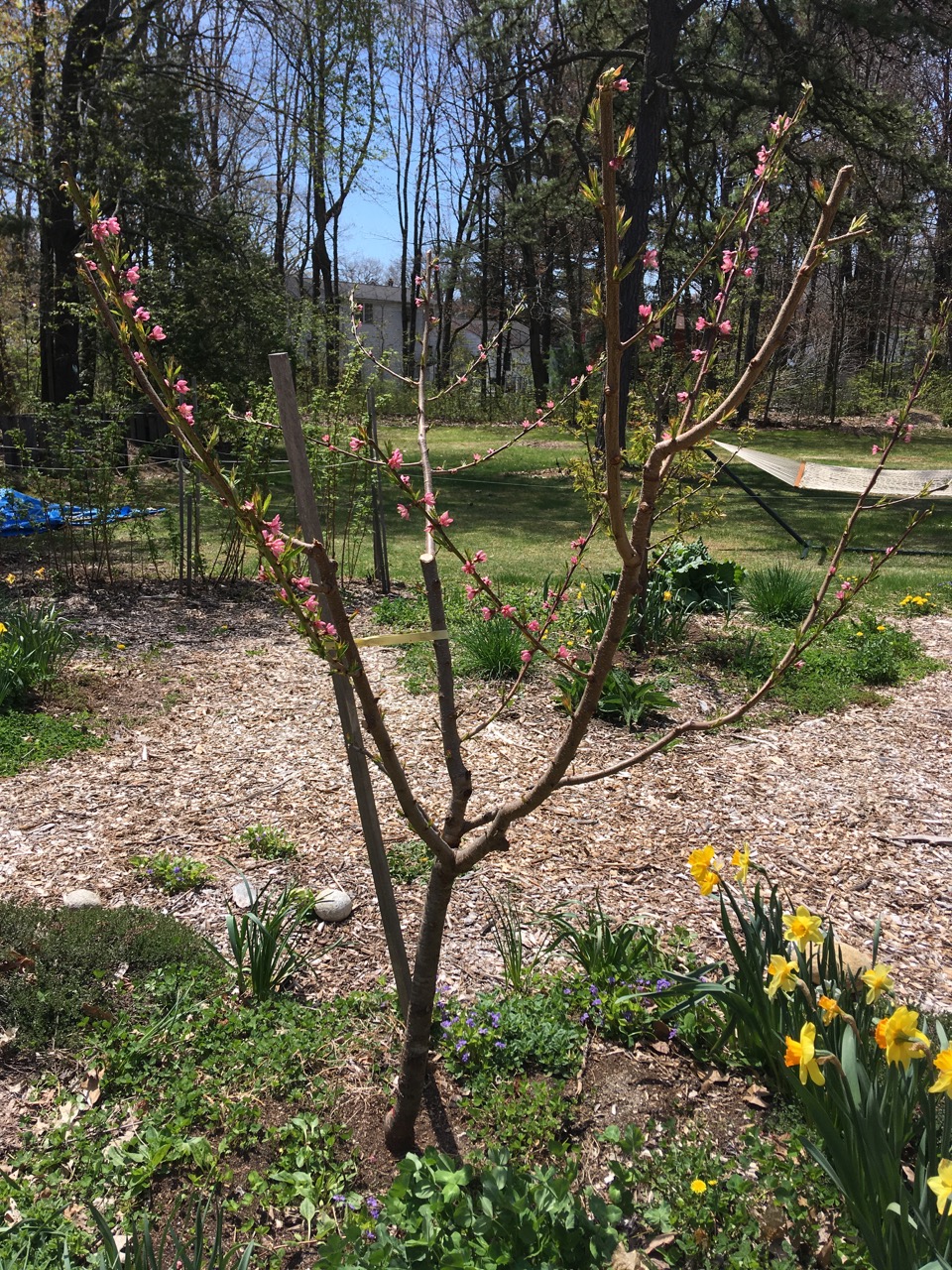 I mentioned in an earlier post [on my own blog] that an annual activity in the spring is pruning the cherry and peach  trees–each year relearning it all over again and steeling myself to the task which seems so harsh. The peach had produced an abundance of branches, but I took out all of the ones growing toward the center, and those that were smaller than pencil size, in order to preserve a vase shape and to build a strong scaffold for future years. I was happy that I was able to leave some branches that were budding, and if all goes well we might get our first peaches this year.

[This post was first published at Finding Our Way Home: A Spiritual Journey into Earth Community.]